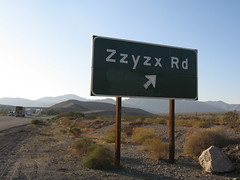 This post is about creating a server side z-code interpreter that represents game progress in the URI. Try it with the game Lost Pig.

I enjoy working on URIs and have the mug to prove it. Along those lines I've combined thoughts on URIs with interactive fiction. I have a limited amount of experience with Inform which generates Z-Code so I'll focus on pieces written in that. Of course we can already have URIs identifying the Z-Code files themselves, but I want URIs to identify my place in a piece of interactive fiction. The proper way to do this would be to give Z-Code its own mimetype and associate with that mimetype the format of a fragment that would contain the save state of user's interactive fiction session. A user would install a browser plugin that would generate URIs containing the appropriate fragment while you play the IF piece and be able to load URIs identifying Z-Code files and load the save state that appears in the fragment.

But all of that would be a lot of work, so I made a server side version that approximates this. On the Web Frotz Interpreter page, enter the URI of a Z-Code file to start a game. Enter your commands into the input text box at the bottom and you get a new URI after every command. For example, here's the beginning of Zork. I'm running a slightly modified version of the Unix version of Frotz. Baf's Guide to the IF Archive has lists of IF games to try out.

There are two issues with this thought, the first being the security issues with running arbitrary z-code and the second is the practical URI length limit of about 2K in IE. From the Z-Code standard and the Frotz source it looks like 'save' and 'restore' are the only commands that could do anything interesting outside of the Z-Code virtual machine. As for the length-limit on URIs I'm not sure that much can be done about that. I'm using a base64 encoded copy of the compressed input stream in the URI now. Switching to the actual save state might be smaller after enough user input.