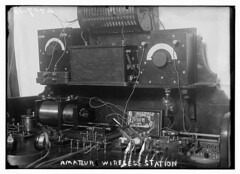 Irritatingly out of line with what their commercials say, in my area Comcast, under the covers of the national broadcast digital switch, is sneaking in their own switch to digital, moving channels above 30 to their own digital format. Previously, I had Windows 7 Media Center running on a PC with a Hauppauge PVR500 which can decode two television signals at once setup to record shows I like. The XBox 360 works great as a Media Center client letting me easily watch the recorded shows over my home network on my normal TV.

Unfortunately with Comcast's change, now one needs a cable box or a Comcast digital to analog converter in order to view their signal, but Comcast is offering up to two free converters for those who'd like them. The second of my two free converters I hooked up to the Media Center PC and I got the IR Blaster that came with my Hauppauge out of the garage. I plugged in the USB IR Blaster to my PC, connected one of the IR transmitters to the 1st port on the IR Blaster, and sat the IR transmitter next to the converter's IR receiver. I went through the Media Center TV setup again and happily it was able to figure out how to correctly change the channel on the converter. So I can record now, however:

To fix (3) I need to manually go through and remove channels I don't have from the Media Center. To fix (1) I may be able to get a second IR transmitter, a third digital converter, hook it up to one of the other inputs on my Hauppauge, and go back through the Media Center TV setup. There's no fix for (2) but that's not so bad. All in all, its just generally frustrating that they're breaking my setup with no obvious benefit.
Tags: cable, comcast, digital, hauppauge, mce, tv, windows media center
Subscribe